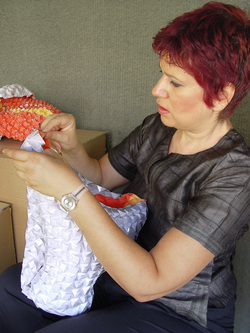 
Gioielli in Fermento award “Joya”, in Collaboration with Akis Goumas, 2014

Scholarship by the British Council, 1991

"Aphrodite 2012/Sacred and Profound Purifications", Bath-house of the winds, Athens 2012

She was a founding member of the “Common Ground Group”, Boston, USA, 1996
She has taught at Southeastern University and at Athens College at Psihico. Currently she gives lectures (“Paper-the transition
from 2 to 3 dimentions”) and teaches seminars on that subject (Art teachers Conference, Chalkis Art School).
Participated as a visiting artist in the workshop "Nature/Limits/Materials - Artistic explorations of natural materials" organized               by KPE Melitis and the department of fine and applied arts, University of Western Macedonia, 2011.
Participated in the  educational activities of the "Visual march to Prespes 2011 "as an organizing committee member, University of      Western Macedonia, department of fine and applied arts, Prespes, 2011.
Her works are in private and public collections.